Students going into the IB Computer Science programme, particularly if it’s HL, will benefit from an understanding of the basics of Java programming and the ability to code simple programs before class begins.

On of the best online courses I’ve found are by a guy called John Purcell from Cave of Programming. His Youtube Java course is here:

If you sign up on his site, then you get to discuss the course with other users and perhaps even ask John questions.

If you cover these lessons before you start the IB Computer Science course you will be very well prepared. As you can see they’re not very long. You will need to have an IDE installed. John uses Eclipse, which is certainly a good IDE, but most IB teachers tend to use Netbeans in class. My personal preference is IntelliJ.

These are the videos that have most relevance to the IB course. Those with asterisks are not directly examined but are useful for making working programs.

This is one of the most popular, and certainly my favorite tutorial about PyGame: https://t.co/fXUU2W2jia #LearnOnReplit

If you are comfortable using IntelliJ with/without Gradle or Maven then fine, but I find that sometimes these tools mask what is going on behind the scenes. For that reason, I often like to use a simple text editor for small projects. To get JavaFX working without a build manager, follow these simple instructions.

Download a version of JavaFX. I downloaded the Linux SDK (version 12) from here: https://gluonhq.com/products/javafx/

Unzip it to a place on your file system that you use to store java libraries. I just put mine in my home directory.

Create Main.java with the following code:

In order not to have to make changes to your CLASSPATH you can add arguments to the compiler and the JVM.

Other modules may be required as you use more features of JavaFX.

There are very few IB subjects that pretty much qualify you for a job straight out of school; IB Computer Science is one of them.

The word count is 2000. If you go over this then the moderator has the right to stop marking the extra. Some parts of the IA have no word count but there are nuances.

What is not included in the word count:

This means that the only parts of the IA that do have a word count are:

A few words of advice:

Please free to ask any questions in the comments section.

I decided to see if I could find where these answers were coming from and I tracked them down to one IB Computer Science website. Reading through the case study notes on that site, I found a whole range of notes that were quite wrong. It is bad luck that a question came up this year on which this website’s notes were particularly bad. I won’t reveal the question or the name of the site but suffice it to say that I have awarded zero marks to literally hundreds of students this year because they wrote down, word-for-word, what was written in the case study notes of this website.

To students, please use a range of sources and cross-check them. Make sure in particular that the definitions you find are correct in the context of the case study.

To teachers, please continue to share your notes online, but be as careful as you can to make sure they’re correct and urge students to use a range of resources.

Is it possible to write a program A that takes another program B as input and which determines if B will halt or loop forever?

Well it turns out that an assumption that the answer is “yes” leads to a paradox and hence there is a proof by contradiction that the correct answer must be “no”.

Assume program A can determine if program B will halt or loop forever.

Now I write a program C that calls program A as follows:

And I now feed program C to itself as input.

We’ve been talking about assembly language in class recently and I’ve found a nice way of comparing source code with the assembly that the compile outputs. This is C, a compiled language.

The code divides 26 by 5 to give a quotient of 5 and remainder of 1, which is left stored in the dividend variable.

(This file was saved as divmod.c and then compiled using gcc, which is probably already installed on Mac computers. If you’re on Windows, you are advised to install the Community Edition of Microsoft Visual C++.)

Now, using a utility called objdump, which is preinstalled on my Linux laptop, I can now output the assembly code that was generated by the compiler. The output file of the compiler is called a.out, so that is the input to objdump. The flags tell objdump to include the source code intermixed with the assembly code, which is very handy for us!

The command to disassemble the compiled code is:

This provides a whole load of output, but in amongst it you can find the assembly code for the divmod function: 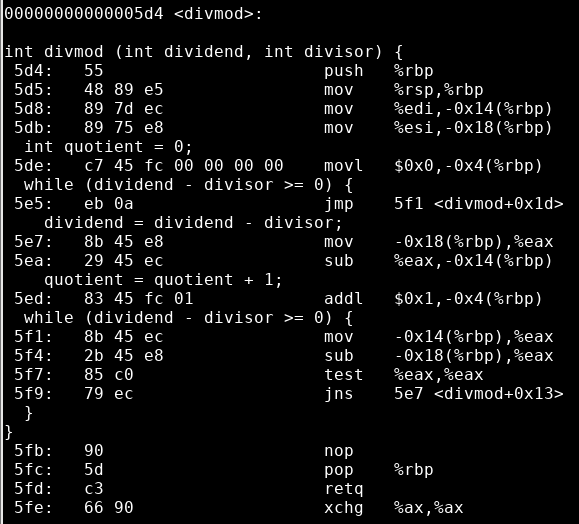 Lots of teachers use these slides. Please do not ask for edit access!


For access to IBO copyright files such as the Subject Guide and Case Study, please go to occ.ibo.org or contact your IB DP Coordinator.